The Topaz suite consists of Topaz AI (a sharpening program), Topaz DeNoise (a noise reduction program) and Topaz Gigapixel (an upsizing program). Each is dedicated to performing one particular editing function.

Lightroom does a decent job of reducing noise, as do other programmes. However, the consequence of reducing noise is the loss of sharpness, creating a ‘soft’ image. Sharpness and noise go hand-in-hand. Increased sharpness results in more noise and decreased noise results in reduced sharpness. Topaz AI increases sharpness and also reduces noise, and Topaz DeNoise reduces noise and also increases sharpness. There might be an argument therefore for only buying one of these programmes, but as they work in slightly different ways, focussed primarily on one function, I prefer to have both. They are bought with a one-off purchase price rather than a subscription and there are often discounts to be had, or you can save by buying 'bundles'. 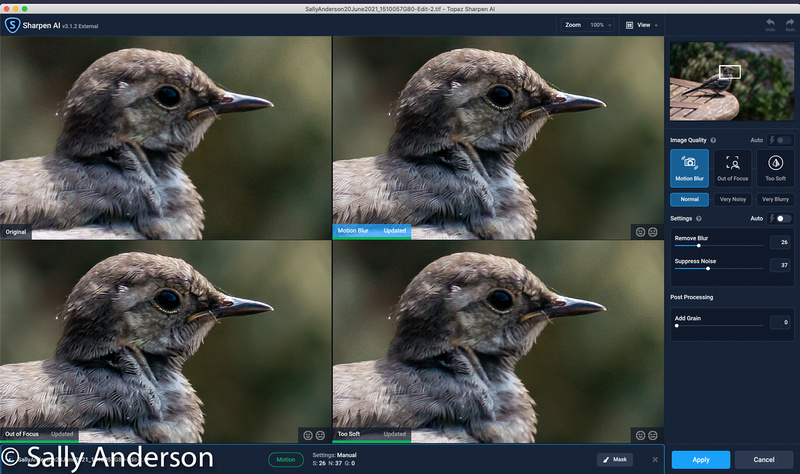 Topaz AI and DeNoise work intelligently and the auto functions usually do a great job without having to do anything manually. When using as a plugin for Lightroom, for example, the best option is to edit a copy of an image in .tiff format.

Topaz AI
Topaz AI has several sharpening settings, including ‘out of focus’ ‘motion blur’ or ‘soft image’. The auto function decides which one is best for a particular image. You can also combine these effects with three other settings of ‘normal’ ‘noisy’ and ‘very blurry’. So far I have found that either the 'motion blur' or 'out of focus' options with the normal setting gives the best results, 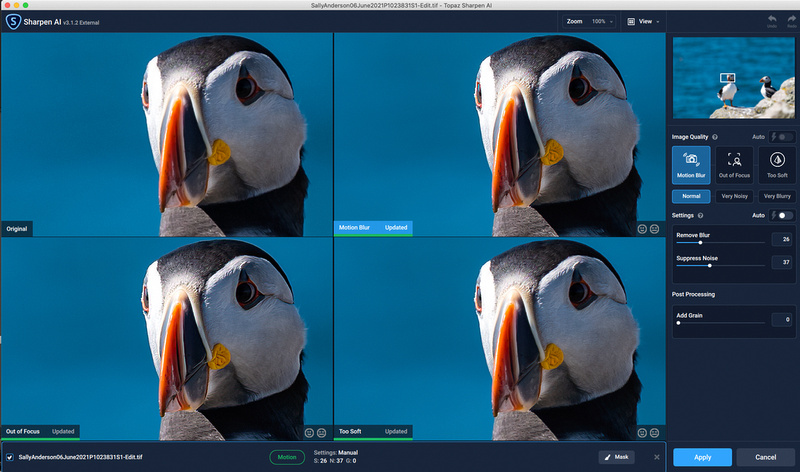 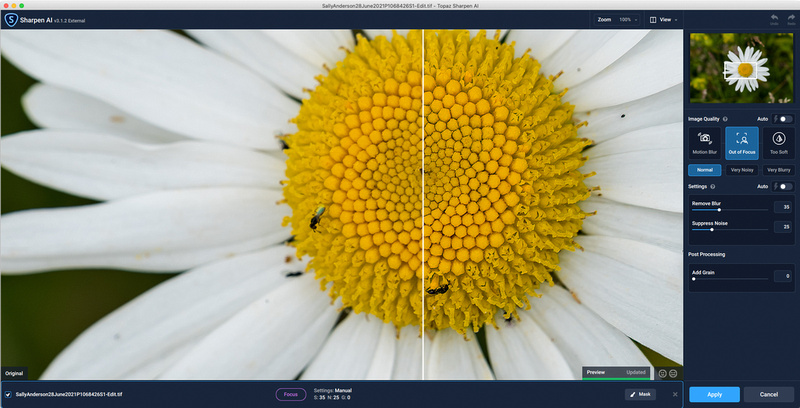 It is even is possible to 'rescue' very blurry images which you might otherwise delete. Here is an example: 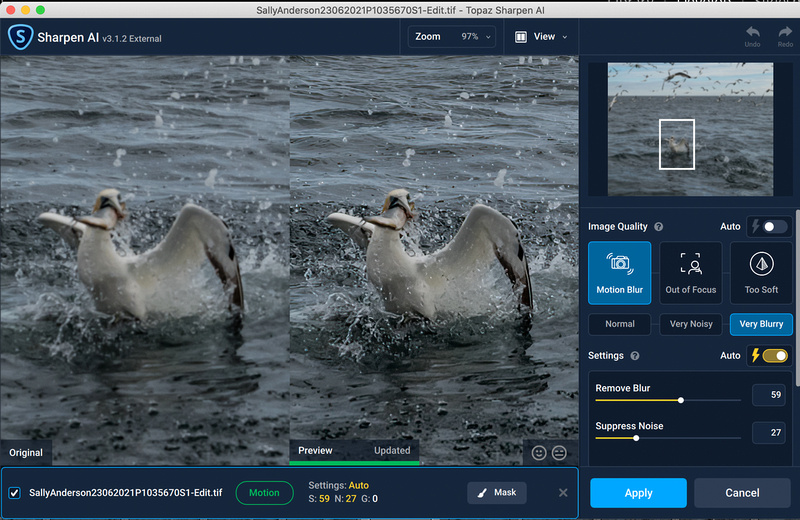 I find it best to first look at the comparison view of all three adjustments and choose the one that looks best. It's useful then to look at the image in one of the other view formats such as the side-by-side comparison of the original and the edit as in the screenshot above, or a very useful split slider view.

Topaz DeNoise is great for removing noise from images either taken in low light or with a high ISO without resulting in blurring, and i find that this is a big improvement on what can be achieved with the noise reduction slider in Lightroom. It has three settings: ‘standard’ ‘clear’ ‘lowlight’ and ‘severe noise’. So far for me, the standard setting always seems to work best. Even images taken with a relatively low ISO can be improved, but again, this will depend on how much time you are willing to spend editing images and whether the differences are important for your purpose.

Original image taken at ISO 1600; a noticeable difference is apparent with the 'Standard" option on the right of the split screen in Topaz DeNoise without resulting in blurring

Original image taken at ISO 2500 t; a noticeable difference is apparent with the 'Standard" option on the right of the split screen in Topaz DeNoise without resulting in blurring

I have found Topaz particularly useful for wildlife images, or images taken in low light. Of course, it all depends on what level of detail you aspire to in your images, and sometimes the difference will only be visible with a trained eye or when zooming in. The example below illustrates the differences between an original image taken at ISO 3200 which is not very sharp to begin with; noise reduction applied in Lightroom and Topaz DeNoise applied (you may have to zoom in depending on the size of your screen). 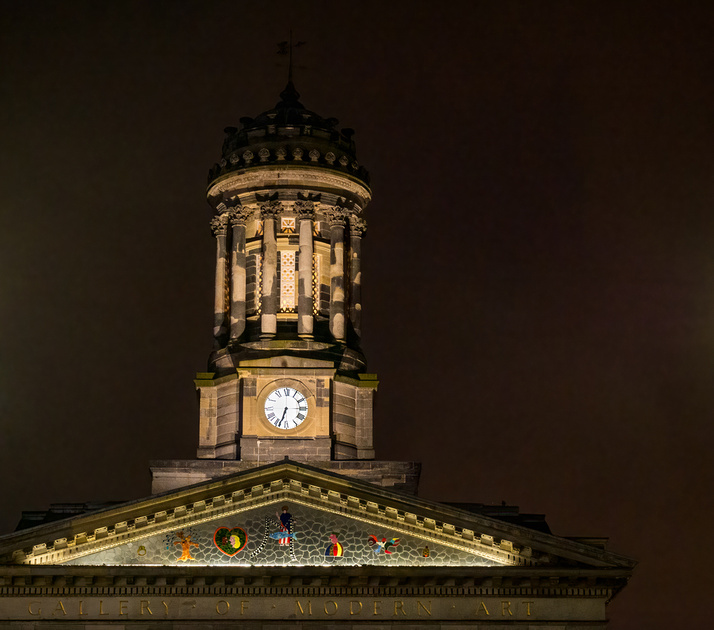 (Note: I have seen reviews that say Photoshop can upsize well for 2-3x increases, but that Topaz is the winner for any increases beyond this which can apparently be up to 6x)

These programs are easy to use, but they can also be used in a more targeted way with masks. If a photo has a very short depth of field, for example an animal with a blurry background, then you’ll only want to sharpen the animal and not the blurry background. You can create a mask of the particular area of the image that you want to affect, like the adjustment tools in Lightroom and Photoshop. The programs auto-detect certain objects in the image such as people, animals, birds and then you can refine the edges of the mask if needed. 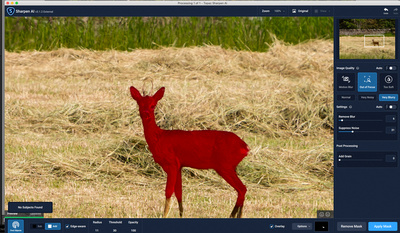 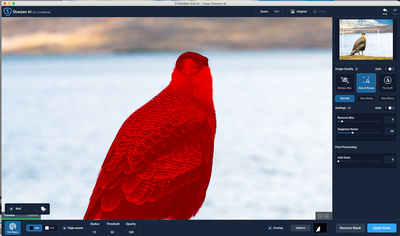 If you think you’d like to give a Topaz program a try, use the link below. They offer a free trial period, but you cannot save an image using the free trial without a watermark. You can purchase the programs separately or as a bundle.